Trolling through an antique store a while back (yes, in person), I came across an old Collier’s magazine that was published about a month before I was born.

So I picked it up, just out of curiosity, to see what was going on in April of 1956—11 short years after the end of WWII. After thumbing through it then stowing it away for years, I came across it again after we moved recently to Auburn, NY and unpacked.

What I found was 108 fascinating pages of stories, political debates and individual spotlights. The cover article featured what was playing on Broadway that season, including My Fair Lady with Julie Andrews, No Time for Sergeants with Andy Griffith, Susan Strasberg in Diary of Anne Frank and Julie Harris as Joan of Arc in The Lark.

Also filling the pages of this bi-weekly publication were a total of 74 print ads and even an advertorial. Mutual of New York, Metropolitan Life Insurance Company and Knights of Columbus actually had business reply portions to cut out and mail back in for more information. Direct response alive and well in 1956!

Quick quiz: can you guess which candy bar had a half-page, full-color ad showing an illustration of a young boy in a cowboy outfit proudly holding up a stack of these candy bars? It’s still popular today. Check the end of the article to see if you were right!

Back to the ads… I did what any curious, self-respecting marketing professional would do. Diving into an age when TV advertising was on the rise, I catalogued the ads just to see what people were selling in 1956.

Here’s what I learned:

1950s— the rise of the family car. According to Ad Age, in 1950 only 59% of households had a car. By 1956, nearly all households owned one, and cars passed packaged goods and cigarettes as the top ad spend category.

In Collier, 19 ads— nearly 26%— had something to do with the automotive industry. Ford, GM, and American Motors all featured their best-selling autos. The Ford Victoria, the Pontiac Catalina and the AMC Nash, Hudson and Ramblers all appeared as illustrations. Ford had a fascinating 2-page spread (in a perfect forerunner of what today is called an infographic) depicting a car’s manufacturing lifecycle. It takes the reader along each step of the assembly line from customer order through rolling off the line, ready to ship. 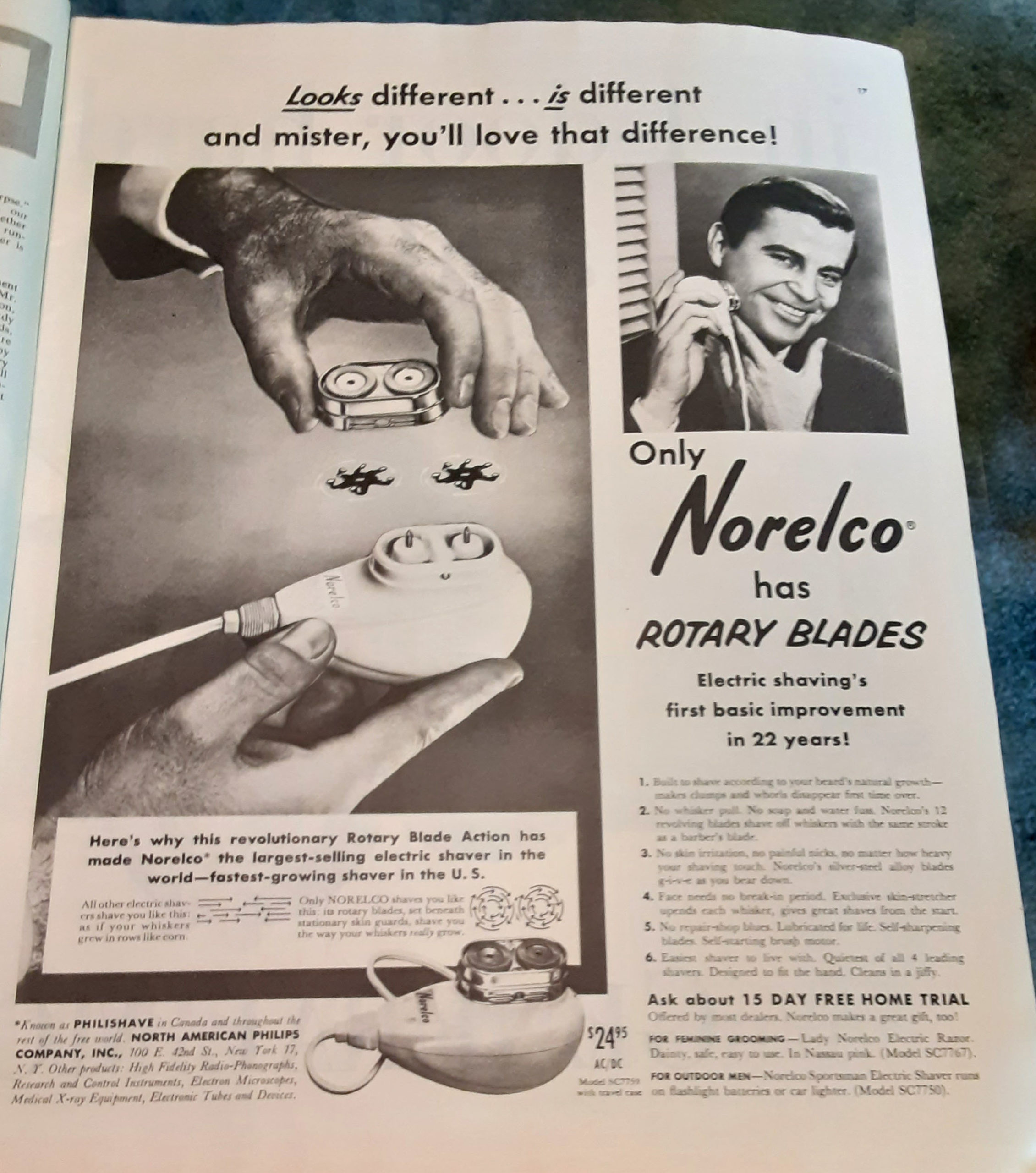 These weren’t dry times. Alcohol appeared in 10 ads, or 14%. Beer, blended whiskey and bourbon had multiple ads, along with Johnnie Walker Black and Red Scotch, presumably before they blended the Green, Gold and upscale Blue we have today. The inside front cover pushed Calvert Blended Whiskey, while the inside back cover splashed a full-page, full-color ad for Old Crow Bourbon. And Schlitz had a full two-page, four-color, lifestyle-oriented beer spread. 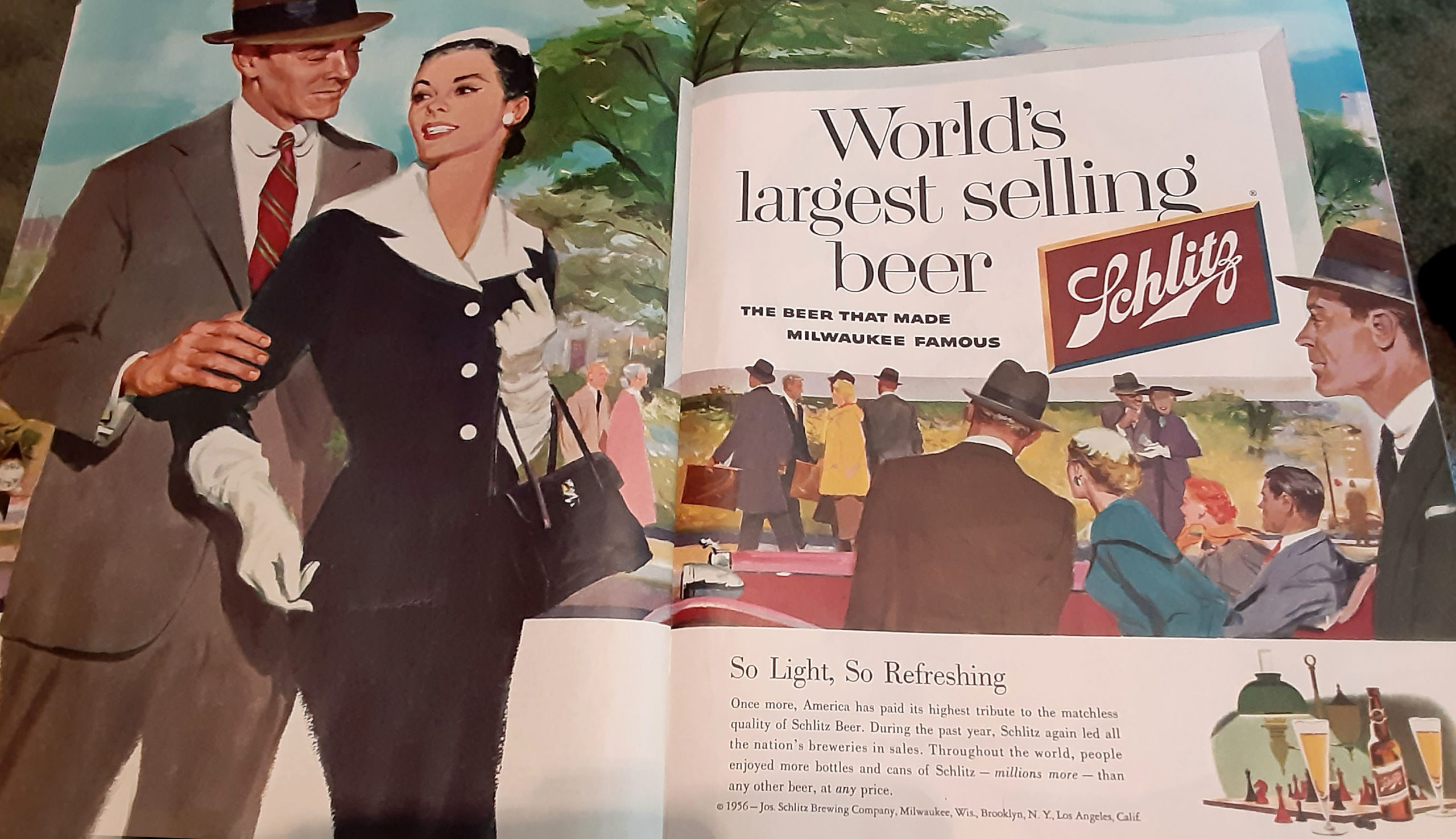 Adding up the percentages, I found that over 54% of all ads fell into the three categories above.

Tobacco ads. These ads became taboo on TV and radio in 1971, but in 1956 there were no such restrictions. A full-page, 4-color back cover ad featured actor Phil Silvers smoking a Camel cigarette for “pure pleasure”. No Surgeon General warning…yet. 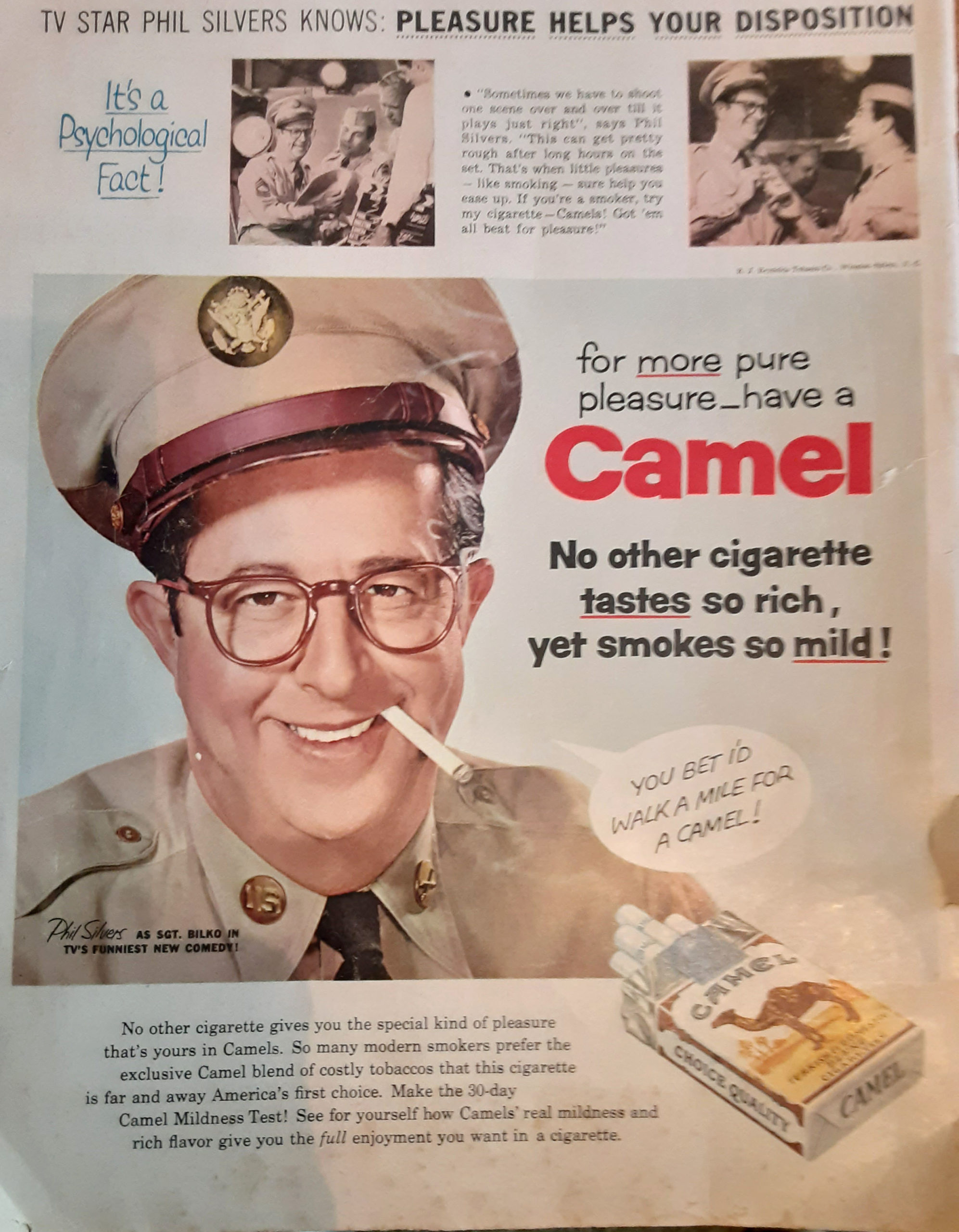 Clothing. Fedoras, top coats, slacks and shoes made by the now defunct Endicott Johnson (Binghamton, NY) showed the well-dressed man of the 1950s. By the way, all men still wore shirts and ties, even on picnics. The women were “dressed to the nines”, all with form-fitting, mid-calf length dresses. In a vast majority of the ads, people were depicted as illustrations, not in photographs. 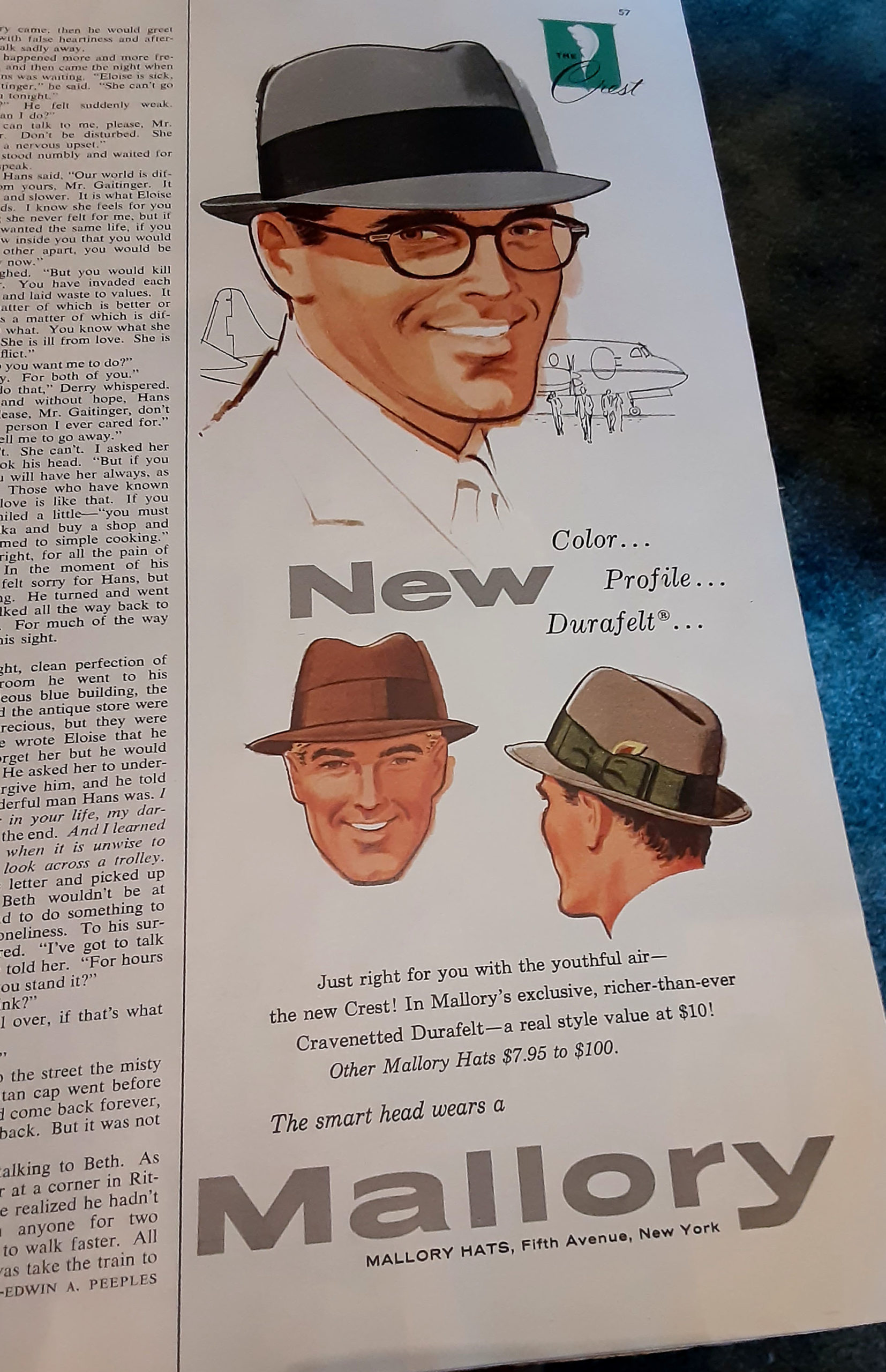 One movie was featured: The Man in the Gray Flannel Suit with Gregory Peck.

Food. Only one food item appeared in a full-page, four-color ad for Campbell’s Beef Soup. Chase & Sanborn placed a half-page ad for its can of coffee. Headline: “Whoosh…this coffee tells you it’s fresher!” Tagline: “Fresher because it’s pressure packed.” Hmmm, well done. Plays perfectly off the headline. But I digress…

For you golfers, Titleist created a quarter-page ad claiming “more pros played Titleist in major tournaments than any other ball.”

I viewed this magazine that carried me back to my birth year through the eyes of someone who has experienced firsthand how much media has changed. But as I did, I realized that the more things change, the more they stay the same. Over the last 60+ years, advertisers have had to adjust their media mix and messaging to attract new generations of consumers and embrace their media of choice.

In 1956, magazines and newspapers were competing with the up-and-coming media of television for advertising dollars. Today, television and print advertisers are being overtaken by digital advertising, projected to be over 50% of ad spend dollars in 2020. As savvy marketers, we must continue to adapt and change with the times, mastering new media and strategies that seem to evolve faster than ever.

And the answer is…

Oh, and that candy bar featured in 1956 that’s still popular with today’s tagline? (“Nobody better lay a finger on my…”) 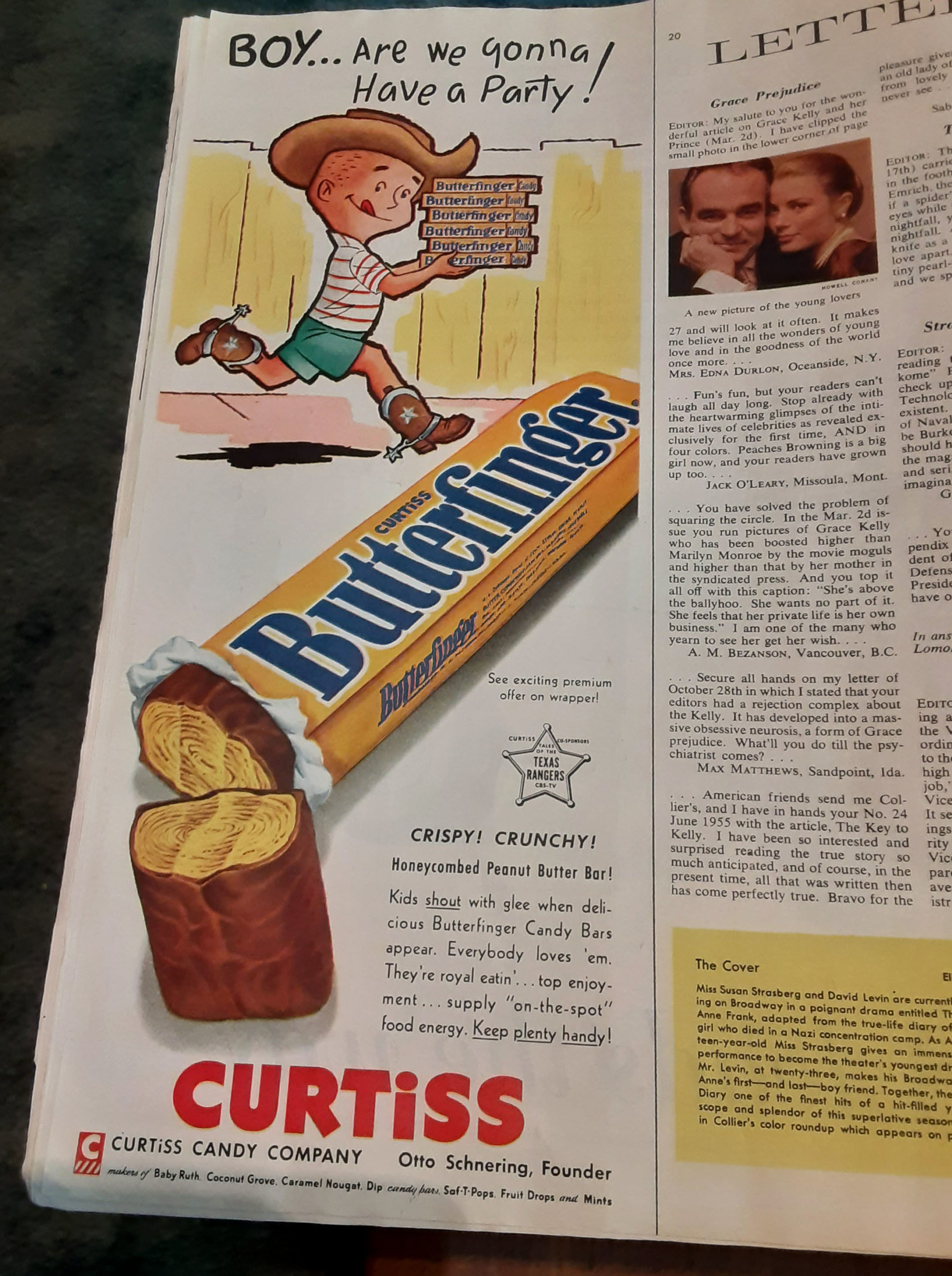