2020 was certainly a year to talk about. With most events being canceled due to COVID-19, one glimpse of normalcy is that the NFL continues to play on. The team that everyone is talking about is our very own Buffalo Bills. Ending the regular season with a 13-3 record, the team won the AFC East Division Championship title for the first time in 25 years and is seeded 2nd in the AFC conference.

In a year where the Bills are playing some of their best football, it’s unfortunate that NYS COVID restrictions are not allowing all the fans to be at the games or any sort of tailgating. Some call it Buffalo’s luck.

So how can the fans stay engaged when we aren’t allowed to cheer on our team in the stadium?

The Bills’ social media team has entered the chat.

Most notably, the Bills’ social media team has been pretty busy lately and an extraordinary asset this season.

If you don’t follow the Bills on any social media platform, you’re truly missing out.

While there are the typical posts with team updates, the team’s TikTok account has been quite the contender in their rise to social media fame.

Comments are circling (the wagons) around from fans saying, “Bills social media team is undefeated”, “easily the best thing a NFL social media has ever posted”, and “The Bills are carrying Tiktok right now”.

If you haven’t already seen any of their TikTok videos, check them out here. You won’t be disappointed. 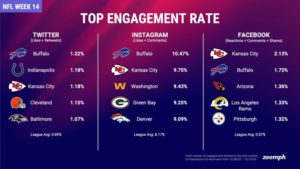 TikTok isn’t the only platform with increasing engagement. Geoffrey Blosat at Zoomph posted a graphic on LinkedIn that shows that in week 14, The Bill’s social media engagement was leading the way in NFL teams on both Twitter and Instagram, and came in 2nd for Facebook. This was after the December 13th Sunday night primetime game against the Steelers.

Here are just a few examples of the team’s creativity with Photoshop and use of memes on their Instagram page.

And of course we can’t forget about Twitter. During the December 7th game against the 49ers, actor Rainn Wilson who played Dwight Schrute in The Office tweeted “Josh Allen is my second favorite quarterback.” Josh Allen himself, quote retweeted Rainn with a reference to one of the actor’s famous lines from The Office. The Bills also had something to say about the tweet, while also referencing The Office.

Assistant favorite Qb, or assistant to your favorite Qb? https://t.co/LCl34Emxum

No matter which social media platform you choose to follow them on, you’re sure to find something that makes you laugh or brighten your day.

As the road to the Super Bowl continues for the Bills, we can’t wait to see what the post-season has in store for both the players, as well as their social media team.